Here’s a short video of Mike and Allison at Velo Veneto. The first section is Mike climbing from Valstagna to Foza (14k, 900m gain). Next are two short clips of Ali racing with the Super Gentlemen in Monticello Conte Otto (I’m riding at the back of their pack trying to film and not crash!) And lastly is Mike attacking from the main field in Ponte della Priula. Great job you two !!! 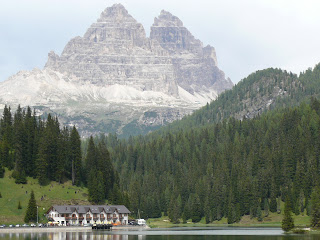 Buongiorno from Bella Italia ! Time to kickstart the action here at Velo Veneto. Tomorrow is the Gran Fondo Campagnolo. There are three distances to choose from. “Lupo” and I will be doing the “medio” fondo which is 118k long. The long distance is 214k which would take too long to recover from since we need to start speed training for the UDACE races that begin for us next weekend. Check out the event website here…
http://www.granfondocampagnolo.it/
I’ll post a event report later, but we expect this to mostly be a training ride as neither of us are fit enough to go for a high placing in our age groups.

Ok, I just had to include this video….both for the “yutes” (young guys) who loved it….and the older guys who didn’t…lol

Hello everyone…you know, Cindy and I are really lucky. We get to live in one of the best places to ride a bike in all of North America, the wine country of Northern California. We’re looking forward to having the new Amgen Tour of California come to Santa Rosa next Feb. 20. The weather here is pretty ideal year round for training…heck this week I rode with Levi Leipheimer on Wednesday (he tore my legs off and he just got back on his road bike!) and today we had a fund raiser for the local Junior team and we rode and chatted with Fred Rodriguez and Chris Horner!!! How much better can it get?

But you know, in my opinion, it still doesn’t hold a candle to riding and racing in the Veneto region of Italy. Yes, I know I’m biased, as we hope to see you all at Velo Veneto in 2006 and beyond. (We’ll have the camp open from early June until early September 2006), but I honestly believe that and for those of you who have been to north eastern Italy before, you know what I’m talking about !!! (Am I the only one who falls asleep at night sometimes dreaming about the roads around the Monte Grappa?…LOL)

So I hope that your training is going well and that you have plans for a wonderful 2006 of cycling, wherever that may be.

In boca a lupo, 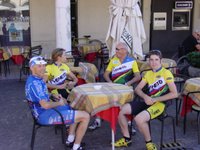 Yes, we are here in Bella Italia…firmly ensconced now for over two weeks in Castelcucco. As our host at the Hotel Montegrappa, Luca, says…”if you need something…we are here.”

We’ve had a great first two weeks. All our prep getting the team van set up and the team jerseys and shorts went flawlessly, so Cindy and I had a couple of days to get some riding and resting in before the first riders came on July 25. Since then we’ve had 3 riders with us.

We also had a 12 yr. old girl who lives here with her father who is in the US Air Force. She was a wonderful young lady to spend some time with. Cindy did three “private” training rides with her (including a new Velo Veneto record for “Esordienti” on the first 11k of the Montegrappa) and she hopes to spend time with us next year and bring some more friends. Maybe we’ll have a special 3-4 day stretch just for her and her friends. Annelise also shared some of the photos they’ve taken at the big races they’ve seen across Europe. In Boca a Lupo … Annelise !!!

We’ve done 4 races so far. In the first on Saturday, 30 July, it was as hot as an oven and humid to boot. Cindy was the only one of the five of us to finish, and of course she won! The next day we were racing near Belluno at the base of the Dolomites and with the morning start times the temperature was a bit kinder. Paul had a puncture and abandoned, I got dropped on the climb during the second lap but finished 18th, Tom got caught behind a crash and couldn’t regain the front peloton and eventually abandoned while Garrett was surprised that despite losing the main, but shattering peloton, he hung in, finished and was 8th place in the Cadetti group.

During the following week we took everybody up to the Dolomites on Tuesday and rode 70k over the Passo Cereda and Passo Duran to Zoldo Alto…the stage of the Giro that Paolo Salvodelli won back in May for the Discovery Channel team on his way to the Maglia Rosa. The course was epic and Paul stated that it was the best riding he’s ever done. Quite a statement from a guy who’s ridden in the Pyrenees and French Alps including many of the famous Tour de France climbs. See what you’re missing?

We’ve also had plenty of good training closer to home in the Treviso province including motor pacing to get the leg speed for racing here at 45-50k an hour.

This past weekend was the perfect ending to our second week with ideal racing weather on Saturday in Bolzano Vicentino near Vicenza. Cindy won her 3rd race so far (and finished with the breakaway group of Super Gentleman, taking 5th across the line!) while Paul was very active at the front of our Veterani race. Tom and I rode near the front but like Paul didn’t take part in the “argey bargey” going on in the final sprint and come across the line safely mid pack. Garrett, only 20 yrs old, and still new to racing at this level, had great improvement and rode strongly until the last 5k when his attack was a bit much and he trailed the field to the line. But Garrett definitely gets the most improved rider award at the camp thus far. Unfortunately, he must return home a week early to be with an ill family member. Next year Garrett!!! (And good luck racing at the Univ. of Colorado next season…)

Yesterday, the weather was not too kind. Cindy was fortunate to have dry weather for the first 50k of her race, but the clouds came in an opened up on the corriedori for the last 10k. Cindy still managed to win, but had one other women right on her heels across the line. Il Lupo (the wolf…Paul) forgot his license so just sat at the back of the field for a workout then pulled off with a couple of km to go. Tom had a nice finish racing in the worst conditions of the day and Garrett “made a tactical blunder” by his own admission and had to abandon half way through the race. It’s been so much fun to see this young guy gain some fitness, confidence and experience the last couple of weeks. He is a Cat. 3 at home in the US and racing here with guys older and stronger than he is like racing with Cat. 1’s at home. I know he’s looking forward to taking what he’s learned and move his racing career to a new level back home.

I have to tell one funny Garrett story though…sorry to pick on you there “Bufalo” … the day he arrived, he had a cleat problem so we rode to the bike shop in Castelfranco. Garrett rides Northwave shoes and Shimano pedals…in typical Italian style, the shop owner just shook his head and made it known he thought Garret had the wrong equipment…that he Northwave was “kaput” and he should have Campy or Look pedals. Garrett got a big kick out of that. He and Tom both seemed to love the folks at Cavalera and they are seriously thinking about ordering custom frames for next year, especially Tom (and yours truly!!!).

Ok, enough for now. We’ll be training hard this week and racing next weekend in the Giro di Vicenza in preperation for Masters Worlds the last week of August.